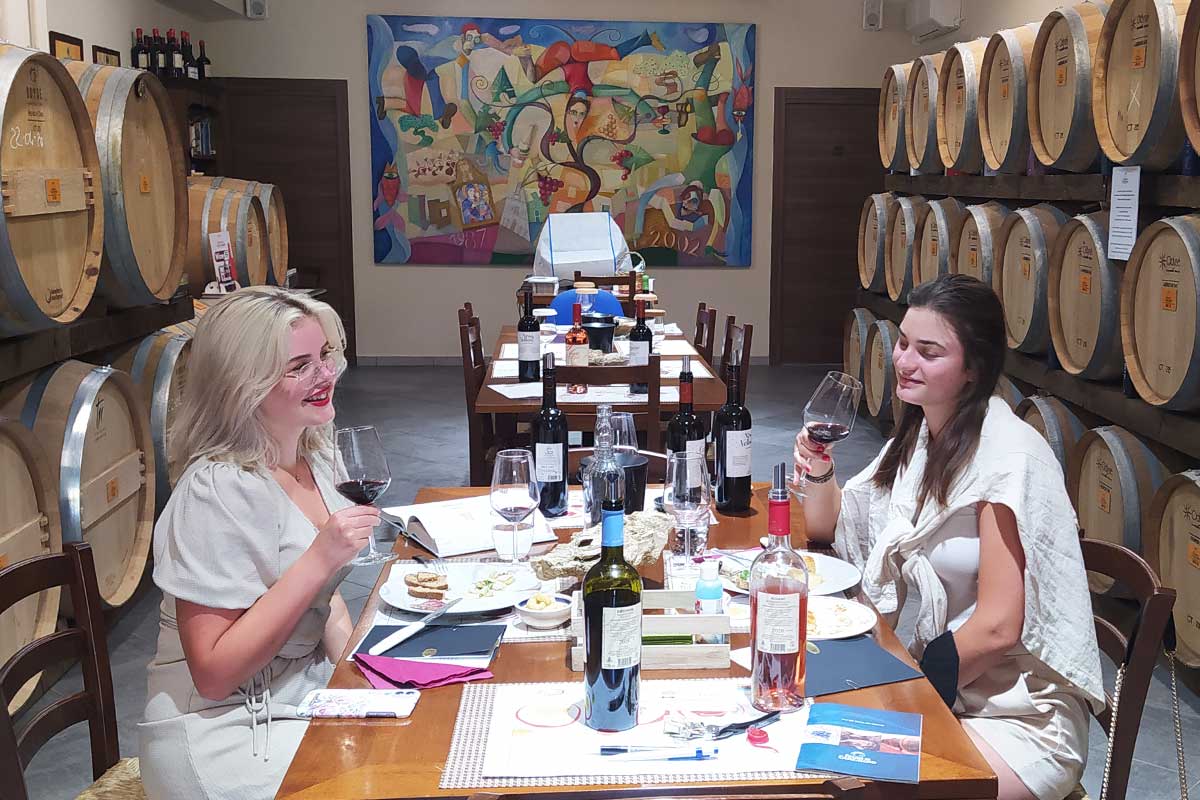 Is it possible to think in Salento without thinking in sea and nightlife? May the sensorial experience connected to the tasting of a wine into a winery tell us about the story of a land?

Thanks to our several wine experiences, you will be able to learn more about negroamaro, the most important Puglia grape variety; you will visit the organic vineyard that has been saved from the photovoltaic business; you will walk through the sunny vines of Malvasia Nera di Lecce and will learn about the beginning of our Nero di Velluto, the most awarded wine by Feudi di Guagnano.

Yes, it is possible.

In this strip of land between two seas, rich in art and traditions, the cultivation of negroamaro and primitivo has deeply influenced women and men’s everyday life, their culture on food and wine and, above all, the economy of a lot of small agricultural towns.

This is the reason why all those who visit Salento must cross the threshold of a winery, get covered their own shoes with dust while visiting a negroamaro vine, taste a glass of negroamaro or malvasia nera between two long rows of barrels or, uncommon event but possible, harvest grapes during the month of September.

In the months the winery has been partly closed because of the restrictions for the COVID-19 pandemic, Feudi di Guagnano has conceived 5 interesting wine experiences for tourists and wine-lovers who are visiting Salento these days. On this subject Feudi di Guagnano underlines the fact that high safety standards are kept during the visits in order to avoid the virus diffusion: exhibition of the EU “Green Pass” at the entrance, tastings outside the winery for all those who do not still have it, establishment of quotas for all the visitors during the opening hours and distance of at least 1 metre between the tables.

Here are some synthetic proposals for the whole 2021.

“Mini Tour in the Negroamaro Land”

The gathering point from where the tour begins is the winery. The vines, cultivated in accordance with the old method known as “alberellos” (head-pruned grapevines), are just outside the town and after visiting them the route is towards the organic “vignesalve” (saved vines) respecting a more and more sought-after biodiversity; an antique and circular hand-dug Salento well made of Lecce tuff is among them.

After visiting the countryside, the tour continues with the visit to the artistic-existential hermitage where a famous Guagnano painter (Vincent) lives; it will be a way to surprise your eyes and your soul being in front of his wonderful Gaudian-style building and his pictures.

Coming back to the winery, the third stop is at the baroque-rococo church consecrated to Our Lady of the Assumption, where the precious Byzantine fresco of the Virgin Mary with her Child is kept and from which the company logo comes.

Have you ever experienced the grape harvest in your life? Picking the bunches of Negroamaro, smelling the flavours of the juice coming out from the ripe berries is something really extraordinary.

The gathering point is at the winery, early in the morning (the hour will be communicated, at least, two days before) and by your own car, to get the route towards the vineyards in the area of Guagnano.

After about 1 hour the experience continues coming back to the winery where the vinification and the ageing processes are explained; yet, there will be the chance to eat grape and home-made bread, but also to have “La Marenna” (a sort of afternoon break to eat some Salento typical food) paired to 3 wines (Rosarò Rosato Salice Salentino Negroamaro DOP + DieciAnni Negroamaro Salento IGP + DieciAnni Malvasia Nera Salento IGP).

The Salento word “Marenna”, coming from Masaniello’s Neapolitan dialect, means afternoon break to eat some Salento typical food. The origin of the name is connected to the sea and to the mariners, since one of the main ingredients of “la marenna” was the anchovies cured in brine.

However, the peasant meaning was different, since “la marenna” was a sort of fast and frugal breakfast that people used to have in the shade of a high tree or in the so called “pagghiara”, an ancient rural building made with stones. “La marenna” was usually prepared with the mariners’ ancient bread, that is the “frisa”, or with a slice of durum wheat bread, both seasoned with small tomatoes (the hanged yellow ones in winter), dried vegetables, such as marrows, aubergines, oregano and, on demand, with salted anchovies and spring onions. A good olive oil was the final ingredient.

At the winery “la marenna” has several versions depending on the season and the availability of fresh products.

During the tasting (3 wines in total – Rosarò Rosato Salice Salentino Negroamaro DOP + DieciAnni Negroamaro Salento IGP + DieciAnni Malvasia Nera Salento IGP) an explanation on the methods of cultivation and vinification of the wines that are object of the tasting will be provided. The experience is enriched with anecdotes, stories and curiosities, such as the one on Leonardo da Vinci’s “cask-filler” that are on some barrels of the winery.

Negroamaro is the most common grape variety in Puglia, even though its true story is still unknown. The name, in fact, has uncertain origins: it is thought that it may come from the dialect words “niuru maru” (black and bitter) or from the combination of the Latin word “niger” and the Greek one “mavros”, which are, both, expression of the typical black colour of the grapes. This experience will lead you through the discovery of some important red and rosè wines. Yet, there will be the opportunity to learn more about Salento cultivation methods and the ageing process of Negroamaro and Primitivo. The experience “Mister Negroamaro” consists of a tasting of 3 wines (Rosarò Rosato Salice Salentino Negroamaro DOP + Cupone Salice Salentino Negroamaro Riserva DOP + Nero di Velluto Negroamaro Salento IGP + Final Surprise) paired to some Puglia bakery products.

In October and November, it is possible to taste some still fermenting negroamaro wines. The guests, in fact, will have the unrepeatable occasion to taste a wine from its origin to the final bottling. Furthermore, in the following months, when the musts are already wine, the guests will have the chance to taste some wines from the barrels in order to learn more about their slow evolution. This is an original and strange way to taste a wine. The name of this unusual experience comes from a sentence in the Italian comedy “Viaggi di Nozze” (Honeymoon) where one of the odd female main character says to her husband, in Roman dialect: “let’s do that strange”.

All our wine experiences are led respecting the rigorous anti-covid-19 protocol; the tourists are divided in small groups and with adequate distance between them; the food is served in single portion and prepared by a local delicatessen not connected to the winery.