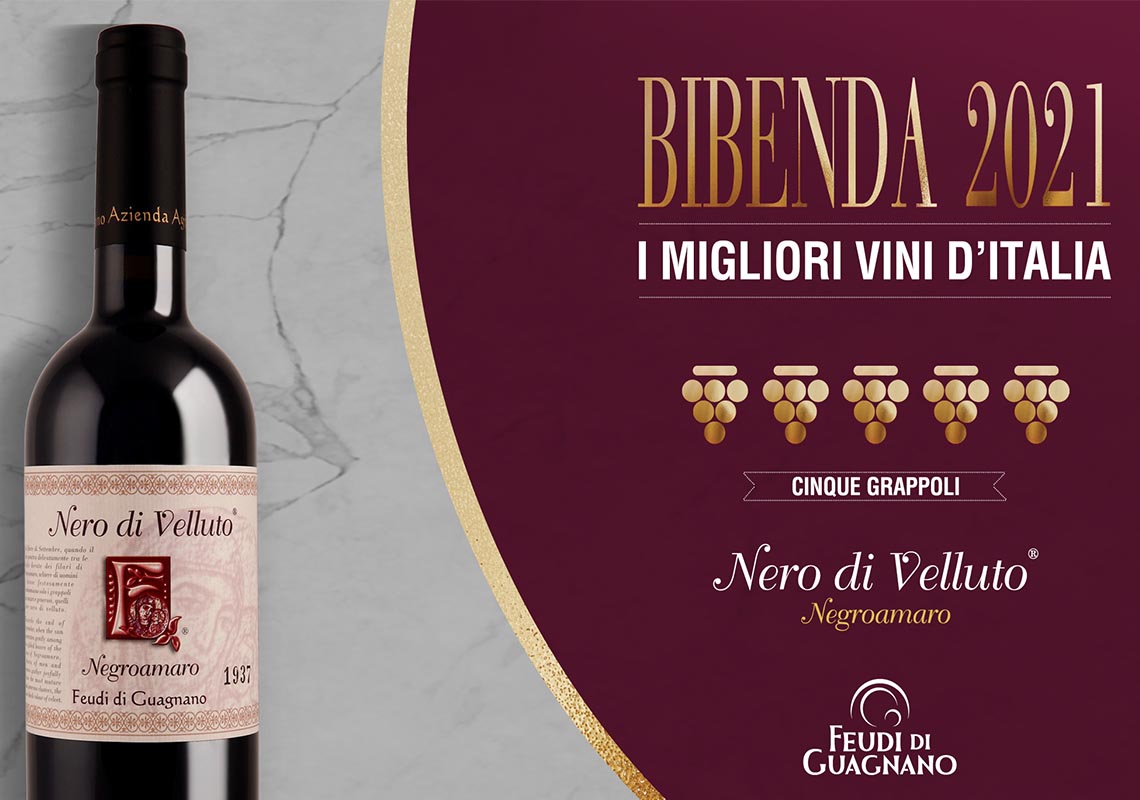 Nero di Velluto Negroamaro Salento has been awarded by Bibenda, one more time, with 5 Grappoli, the most important award for a wine here in Italy. The last awarded vintage is 2016, that is the synthesis of an extraordinary harvest for our company and our wines. The previous awarded vintages are 2012, 2013, 2015, 2015, confirming the ongoing quality of this exceptional wine.

The tasting commission has described 2016 Nero di Velluto as follows: “Dense ruby red wine depicting the glass. Hints of plums, black cherries, myrtle and clues of rose, violet, even withering, Mediterranean scrub, tobacco and cocoa come out on an olfactory plot recalling eastern spices. Full-bodied, it is made fresh by a brightening acidity and precious by some noble tannins. Long final on some “fumè” memories”.

“We were considering a symbol wine for our winery” – Gianvito Rizzo, CEO of Feudi di Guagnano, says– “without being in the limelight. The “basic element” had to come from the oldest vineyard (1935) that had survived to the second World War and to the neglect. The first harvest took place in 2002, but it was a disaster and the quality not exceptional: worse than that was the 1995 one”.

Due to this natural “accident”, the harvest strategy changed and only the best negroamaro bunches were picked and put in small wooden boxes in order to semi-dry them for 30-40 days and to get an increase of sugar, polyphenols and anthocyanins. The resulting wine, more or less 18 hl for 2,298, all numbered by hand, oaked in 8 used barrels coming from a Burgundy famous winery.

The “baptismal” name of this extraordinary wine comes from “La Vendemmia nel Salento” (1918) by Giuseppe Palumbo, published in “Varietas”: almost as a presentiment, part of it has been transcribed on a piece of paper a couple of years before. “After the first harvest, in 2002” – Gianvito Rizzo concludes – “that part was read again until our eyes stopped on the following sentence:  “[…] And at the foot of the grapevine all has become black like velvet, all is ripe and smells deliciously”.

It was 2002, October, 7th and Nero di Velluto had been just created officially.